Last weekend we laid my Pa to rest. It was so hard to say goodbye, and so hard also to carry on without him. I sang Ave Maria at his funeral mass, accompanied by my husband on piano. I played a bit of flute too! I also wrote and delivered the eulogy at the prayers and viewing on Friday night. We were expecting 50-75 people, but over 400 came!! That was the kind of guy Pa was, very friendly, happy, warm and welcoming to everyone.

There are some great pictures on his legacy site, and here are a couple more.

My husband and Pa - their birthdays are close together, near Thanksgiving, so we always celebrated together. 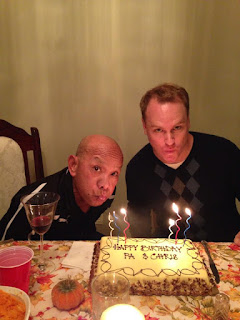 And the pic collage I made last Father's Day. 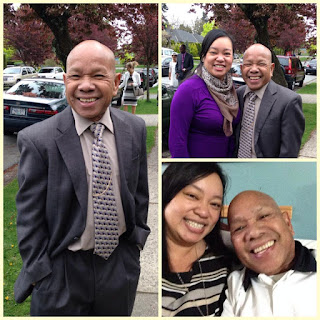 ​
And here is the copy of the eulogy I wrote for him.

Good evening, and thank you for allowing me to say a few words in honour of my dad. Mario was a happy-go-lucky man who always had a huge, beaming smile on his face. Most of you know he was a small man - his nickname, in fact, "Atog," means "shorty" - but he truly was larger than life, with a big smile to match his big heart.

On October 9, 1946, Mario Suratos was born in Tondo, Manila, one of the poorest areas of the Philippines. I don't know much about his early years, but I know things got interesting by the time he arrived at the U.S. Naval Base in Subic Bay. First, he began his training to become a Journeyman Red Seal Machinist, which would lead to a career spanning 40 years. And second, he met Virginia there, who would become his wife of almost 50 years.

In 1974, they immigrated to Vancouver. Their five children Tina, Annabelle, Jimmy, Leslie, and Jennifer - that's me - grew up in a house on Windsor Street, not too far from here. It was the site of many birthday parties, holiday gatherings, and back porch barbecues. He sponsored his parents to come and live with us, and opened his doors to other families making the transition to Canada. This huge sense of generosity and acceptance is a legacy shared by many people. He was truly everyone's Pa.
Both he and my mom worked hard all their lives. Mario worked at both Wescan Engineering and Sulzer Pumps for decades. He tried his hand as a businessman, owning a laundromat and even a night club for a short time. He discovered a talent for ballroom dancing. He was a member here at St. Andrew's Parish where he sang in the choir and joined Couples for Christ. He started a side career as a financial advisor with Primerica. Pa was a beginner at golf, but he still loved to play the game, especially when he got to drive the cart. He often hung out at the mall, having coffee and chatting with the Oakridge crew. Only a few short weeks ago, they sold the house on Windsor Street, and he had even more time to take Mom for soup or wings or a buffet at the casino. He led a full and vigorous life.

Mario was proud of being born in the slums of Tondo because he rose above his challenges and accomplished so much in his life. He loved kids, his grandkids, his own kids - and we all loved him back. Once, when I was a teenager, he came to see me sing at a school musical. In my defence, it was probably one of the first times I had ever performed in public. He told me afterwards: "Jenn, your voice sounds so nice, but what's wrong with your face, why is it so crinkled?" That was Pa's way: funny, honest, direct. In closing, I'd like to sing a few lines to send my dad on his way; you can let me know afterwards if I finally managed to follow his advice.

It well may be
That we will never meet again
In this lifetime,
So let me say before we part,
So much of me
Is made from what I've learned from you,
You'll be with me
Like a handprint on my heart.
-- Stephen Schwartz, "For Good," from the musical "Wicked"

Thank you Pa, for everything you have taught us, for taking such good care of our mom, and for continuing to watch over us all. We are comforted by the fact that you suffered no pain and lived your life to the very fullest. We will always remember you as a bright, smiling beam of light that will continue to shine in each of our hearts.

Posted by Jenn's Yarn Addiction at 11:36

Jenn's Yarn Addiction
Vancouver, BC, Canada
Follow me on my yarn adventures as I attempt to use up my stash, one lonely yarn ball at a time.